The day we left the mountains behind us broke his heart a little. We drove away with all our possessions crammed in a moving truck and said goodbye to those majestic peaks. It was all he could do not to sob like a baby heading up the canyon and away from our home as we knew it.

Mountains are his thing. Growing up in the flatlands of Kansas as a kid, he found himself in the mountains when he left home as a young man. He built trails, he led trips, he hiked up to the places where the oxygen is thin and makes your lungs burn with every step. He even donned a backpack and trekked for weeks in a place so remote it literally hadn’t been mapped. There aren’t many places left like that. Fresh ground never trod by man’s footprint. Places where a man can conquer the world simply by stepping forward into it.

The mountains called to him, and he went out into them. Exploring and finding himself, his vocation. He would return from his explorations bent on etching out a living from the crags and cracks that loomed high above his head. He learned that a livelihood could be made from photographing an adrenaline rush. That entire budgets existed to show off the grandeur of the streams that flowed from the hallowed peaks down to the mighty oceans. The mountains–they became his destiny. They were his food. They were his religion. They marked his identity and gave him a purpose to pursue something greater out there in the Wild.

The mountains shaped my husband and called out something within him that nothing else ever will. And he misses them, I know.

We left the mountains behind for the rugged shores of a great big lake. It’s beautiful here. And cold. No fast-paced city at the foot of a lofty range. The country sky is our night scene now. There’s no real skiing or climbing. We have state parks and scenic views. The gardens are breathtaking and the winters have an untamed raw beauty all their own. Summer is heaven at the lake. Trees tower overhead, bluffs poking out into the rippled waters below. The people are honest and kind. And our family is here too, so he’s learned to morph his business into something that survives the rocky shores and lush forests of our new home.

Some would say he went soft. Gave up a life of freedom and adventure for the chains of a family. He collected a wife who doesn’t earn an income and a lawn that needs to be mowed. He’s got four kids, with appetites and needs and little legs that can’t go fast. Can’t go far. Certainly can’t climb up to those high places where he once stood surveying his life, the world literally at his feet.

And he’s ok with that.

You see, out there in the wilderness my husband discovered what so many men have missed on their coming-of-age treks through the woods. As a young man he may have found himself in the mountains, but he did not lose himself there. While he may have left behind a scenery so special to him, he took along the lessons of that landscape.

Now he looks out on a different vista, fraught with all kinds of new challenges to tackle and majesties to behold. In one direction the view sweeps off into the future, four little peaks, all uncharted. All untamed. Each day the sun rises on these glimmering little mountains, promising adventure, treachery, and hope for the years yet to come. And though the journey is slow and the slog is long, he knows the thrill of making it to the summit. That’s what keeps him going on this path of fatherhood. The climb he is on now is one that will make him a real man, one who can lead generations onward into the unknown, laying down his own rights for the benefit of those who come after him. These four peaks are the toughest terrain he has ever tackled and the most rewarding footprints he’s left behind. 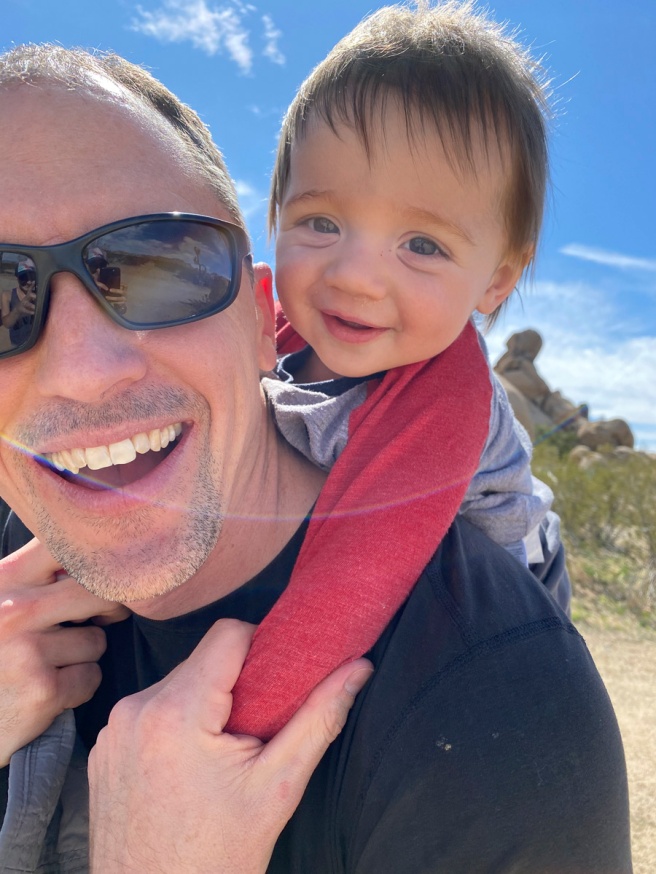 And at their center stands a mother mountain, the one landscape he must learn to navigate so well, he could do so with his eyes closed. It will take a lifetime to map her out. To learn her highs and lows, her vulnerable spots, her rocky slopes, her glowing meadows where her heartbeat can be felt underfoot. The mountains may have called him out, but she calls him home.

They say there aren’t many uncharted, wild places left in the world where a man can really go searching and find himself. But my husband would disagree. For him the most life-changing mountains are not the ones he left behind, but ones living, breathing, and rising up in his midst. He would say it’s  the mountains among us that make us who we are.

And as I watch him traverse his way through life, really it is him who has risen up, becoming a mountain himself. A man of enduring resolve, an icon on the frontier that is our family, and a majestic pointer to the One who’s glory he reflects.